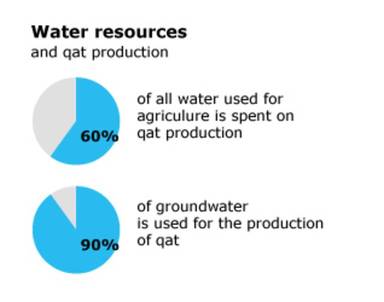 Yemen’s streams and natural aquifers grow shallower every day and Sana'a
risks becoming the first capital in the world to run out of a viable water supply.
The water table in the city has dropped far beyond sustainable levels, because
of an exploding population, lack of water resource management and, most of all,
unregulated drilling.

Annual per capita water availability in Yemen is 115 m3; this is less than 10%
of the regional average and 2% of the world average. In rural areas, only 38%
of the people have access to safe water, and the corresponding figure for
urban areas is 59%. With no permanent rivers, the country depends largely on
groundwater extraction as well as rainfall. Annual groundwater withdrawal (from
wells and springs) exceeds recharge at an alarming rate. Approximately 90% of
all water consumed is in the agricultural sector.

Until the early 1970s, traditional practices ensured a balance between supply
and demand. Then the introduction of deep tube wells led to a drastic expansion
of land under cultivation. In the period from 1970 to 2004, the irrigated area
increased tenfold, from 37,000 to 407,000 hectares, 40 percent of which was
supplied by deep groundwater aquifers. Other incentives to expand farmland
came in the form of agricultural and fuel subsidies. Farmers began growing less
of the local, drought-resistant varieties of wheat and more water-intensive cash
crops such as citrus and bananas.

The water supply in this largely arid country has been the source of decades-long
ethnic conflicts, particularly among nomadic groups. In the northern governorate
of al-Jawf, a blood feud between two prominent local groups has continued
unabated for nearly three decades, largely a result of the contested placement of
a well on their territorial border.

Abdulwali el-Jilani, a water specialist in Sana'a with the Community Livelihood
Project, a program to improve water access funded by the US aid agency
USAID, warned that as water supply diminishes, tensions will rise: "Water is and
will be the reason for powerful conflicts in the future."

Lack of access to improved water supply has been responsible for the spread
of water-borne diseases on a scale not witnessed in decades, according to
UNICEF. Dengue fever, diarrhea and cholera have spread at alarming rates in
rural areas where access to clean water is limited. Last year, more than 30,000
Yemenis were suffering from acute watery diarrhea.

The vast majority of the water in Yemen – as much as 90% – goes to small-scale farming, at a time when agriculture contributes only 6% of GDP, according to UNICEF. Though few precise statistics are available on the subject, 60% of all agricultural water allegedly goes to the cultivation of qat, a narcotic plant chewed by most Yemenis. More than half of all water in Yemen is used to cultivate a plant that feeds no one, in a country where almost half of the population is food insecure.