Water Supply & Consumption Out of Sync 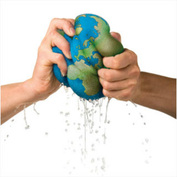 The OECD estimates that 2.8 billion (or 44%) of the world’s people currently live in areas experiencing water stress.  Projections based on population growth and the continuation of current consumption patterns indicate that this figure could rise to 3.9 billion by 2030.

In short, there is already not enough water of the form and quality we need, and this deficiency is not likely to be remedied soon.  What are the implications of this water shortage?

Short-term implicationsLong-term implications
There are some who argue that one way to increase the efficiency of water usage is to put it under private (read, for-profit) control so as to let markets determine where the water goes, in what amount, and how much it costs. Right now the water industry is a hybrid mixture of public and private management.

The term privatization covers a wide spectrum of water utility operations, management, and ownership arrangements. There have been at least 3 models of water privatization.

In the United States, the contracting of O&M to a private provider has been more common than the sale of utility assets. No major U.S. city has sold its utility assets although some smaller water vendors have done so.

Widespread privatization efforts grew in the late 20th century when international financial institutions such as the World Bank and International Monetary Fund required countries seeking assistance to deregulate, abolish subsidies, and even sell part of their water systems and infrastructure to private investors. The rationale was that privatization would result in more efficiency and less corruption. Private investors would have the incentive to build, maintain, and upgrade expensive water facilities in order to make profits, whereas governments in many of these countries (usually LDCs) had been doing a poor job of stewarding their publicly-financed (and often starved) water industries. These privatization programs continue today in many heavily indebted countries which continue to seek loans and aid from international institutions. It is estimated that around 15% of the almost 4 billion people in the world who have access to clean water get it from a private company.
Source: http://blogs.sacbee.com/photos/2010/07/pakistan-water-crisis.html

On one hand, many would say privatization has produced the intended benefits.

On the other hand, privatization is often seen as having failed much of the world’s poor.

Many argue that water is a human right and as such it should not be treated like a commodity. However, a number of investors argue that water could become the “new oil,” and this view is spurring considerable investments in the industry. The privatization debate remains highly contested. Looking forward, it is unlikely that entire water systems will reflect a pure form of either private or public ownership. Governments at all levels will likely maintain a role in water regulation and management no matter how the industry itself is funded, but major power brokers will likely be private entities. That said, although privatization of water systems seems unavoidable in the future, it still undeniably has important impacts on the livelihoods of billions of people around the world. The following pages of this section will look more closely at two case studies of water privatization--Bolivia and Sweden.